By Cancan Wang and Line Henriksen

About a year ago at a casual lunch, we started talking about magic. We were both fascinated by the dissemination of ‘magical memes’ that spread curses and luck on the internet, and wondered why these digital spells flourish, and what they might indicate about the role of magic in a digital context. Recently we came across The Cyber Spellbook: MagicK in the Virtual World (2002) by Patricia Telesco and Sirona Knight. Sitting separately in front of our computers during the Danish Corona virus quarantine, we thought this might be a good time to talk about – and write a short text on – magic. After all, one might need a spell for good luck (preferably a digital one to maintain social distancing) in the time of a global disease outbreak. This text is an excerpt from our online conversation  – mediated by Zoom – around the text on the cover of The Cyber Spellbook, as well as its Amazon reviews. This digitally mediated conversation ended up touching on issues such as spellcasting, conjuring, and temporality in a digital sphere. In case you’re looking for more in-depth engagements with the topic of magic and technology, see the works of e.g. Briana Pegado, Nazila Kivi and Simone Natale + Diana Pasulka.

Wang: So let’s look at the cyber spellbook. It is a book that came out in 2002, which is about 18 years ago. I actually don’t know how long this concept of digital witchcraft or cyber spellbook has existed. Cuz it seems like if the book came out then, maybe these concepts have been there for some time. Don’t you think so?

Henriksen: I’ll do a quick google for ’digital witchcraft’.

Cookbook: How to create a writing monster

As seen on this blog!

Making writing monsters is easier than you think, and an ideal family activity to have fun with over the holiday break. Living with them is another story (this might be a life-long ethical exercise in living with something that you do not fully control). Follow these easy recipes and have your own monsters ready in a fraction of the time it takes to order them online:

To recreate your own text using other people’s sentences.

Finished! You have now created your very own collage monster in no time, with very little effort, and eternal damnation to follow. Bask in your own accomplishments with lightning, a good thunderstorm and some hubris before the consequences catch you unawares.

This blog post springs from and reflects on the Monster Writing workshop at ETHOS Lab, IT University of Copenhagen, November 2019. It is written by using and not accepting track changes. For other examples of multiple voices as monster methods, listen to the Monster Talks podcast episode Collective voices and the materialisation of ideas – monster as methods, or read the introduction to the Monster Network special issue of Somatechnics Journal, Promises, Monsters and Methodologies: the Ethics, Politics and Poetics of the Monstrous. 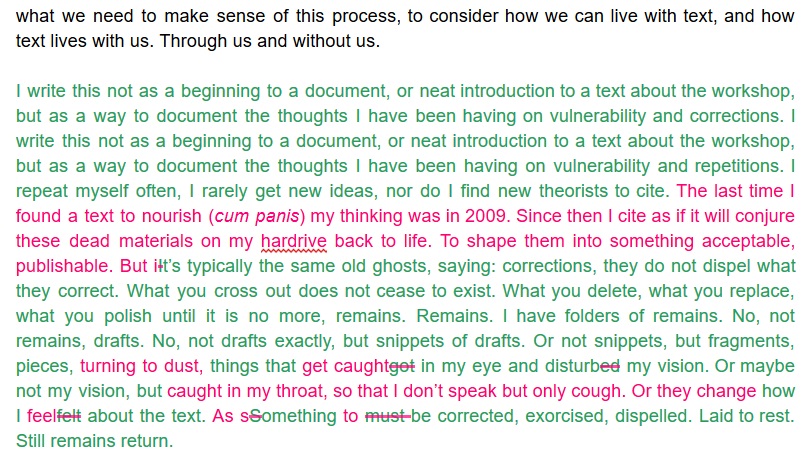 I don’t know if you want to be written

What might it mean to think of writing as monstrous? Or the act of writing as the act of creating a monster? Like the weird scientist in the lab. Like Frankenstein chasing his creation across the Arctic after rejecting it.

In the workshop ‘Monster Writing’, which was held in November 2019 at ETHOSLab, the IT University of Copenhagen, we explored text as something somewhat monstrous. Drawing on Nina Lykke’s exorcise of ‘writing the posthuman’ – in which she suggests that the writer addresses the object of their writing as a ‘you’ directly in the text – we wanted to experiment with what it might be like to address the text itself in this way, as a you, but out loud. A summoning. We therefore asked the participants of the workshop to bring a text that they were somehow not completely happy with. In the invitation we wrote:

END_OF_DOCUMENT_TOKEN_TO_BE_REPLACED

In July of 2019, the Monster Network was invited to give a keynote at the symposium Monstrous Ontologies: Politics, Ethics, Materiality at the University of Roehampton in London (you can listen to our keynote here). One of the presentations at the symposium was delivered by the architects Signe Pērkone and Ramón Córdova, who talked about how they work with the monster in their own architectural practice. We were intrigued and interested by what we heard, and saw a lot of connections to how we think, work, and write with the monster in the Monster Network. So we asked them if they wanted to write a blog post for us!

In what follows, Signe and Ramón write about their experience working with, amongst other things, a territory occupied by a vast landfill close to the southern border of Mexico. During their talk they showed a video from the landfill, which can be viewed here (password: Ecologies).

Before giving you a chance to explore architecture and the monster, we let Signe and Ramón introduce themselves:

Signe and Ramón are architects and researchers based in Riga, Latvia. They strive to practice architecture as an integral part of the affective and relational lived experience. They have studied, worked and done research in Europe and Mexico, and their work has been presented in various conferences, art exhibitions and publications. They are interested in expanding their practice by intersecting it with other disciplines, and fostering discussion of its becomings and emergence from territories and assemblages of human and non-human components.

Meeting the Monster Half Way

Monster as a Tool for Enriching Spatial Practices

There are territories, places and spaces that after establishing relations with certain agents or in particular conditions become monstrous assemblages in the collective imagination, from slums to squatted buildings, and from crime infested city communities to remote landfills inhabited by migrants. But what does this monstering mean for the places themselves? What does it mean for us, who need to interact with them? Even more, those who deal with spatial disciplines, such as architecture, are often called upon to intervene in these territories, to make sense of them, to “improve” them. However, there is a danger in acting before understanding because, in one way or another, this leads to forced conclusions, filling in the gaps in knowledge with assumptions, and normative faux-solutions. END_OF_DOCUMENT_TOKEN_TO_BE_REPLACED

My Tweets
The Monster Network
Blog at WordPress.com.
Loading Comments...